Coming from a devout Catholic family, attending Sunday service was on my list.  Waking up early on Sunday was not a problem at all, the effects of jet lag were on my side that day.  While it was still dark outside, with a map in hand, I made my way through Myeong-dong's Main street to Myeong-dong Cathedral.  I was relieved when I made it there within 8 minutes of fast walking.

I was not deceived, it was truly breathtaking! 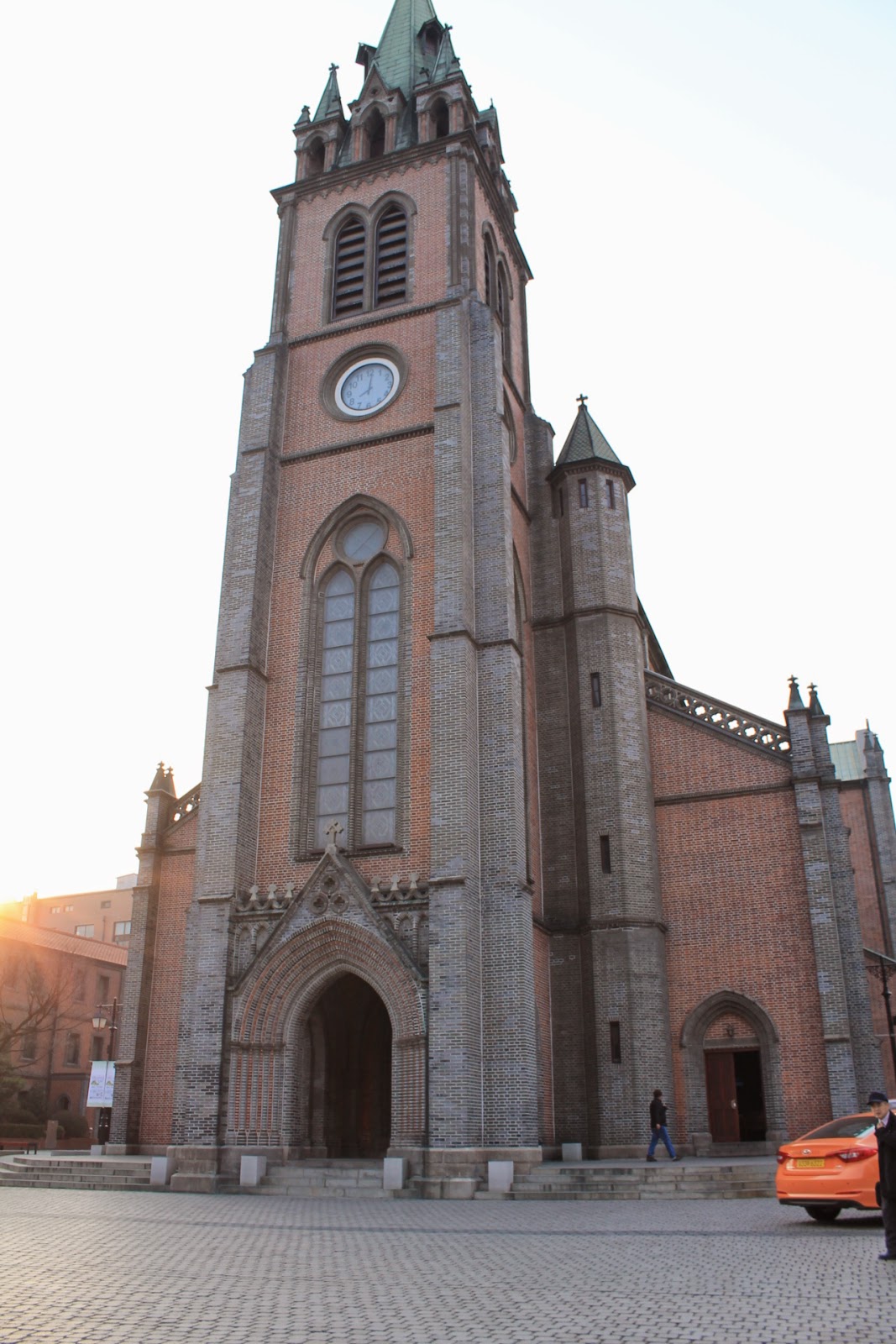 The Cathedral is a symbol of the presence of the Catholic Church in Korea. It holds a wealth of religious and political history. Very different from other churches in the country, the cathedral was the first gothic style church to be built on brick.
The importance of catholicism was evident in Pope Francis's visit last year in the Summer.  His visit attracted close to 1 million catholic Koreans.  An estimated 11 per cent of South Koreans are Catholic,  (Pew Research), which is impressive considering it is situated in a region where the predominant religions are Taoism, Confucianism, and Buddhism. So you may wonder, why is Catholicism so important in South Korea?

It played a major role in South Korea's transition into a democratic nation in the late 70's and 80's.  Under the leadership of Cardinal Kim, the cathedral served as asylum for Protestors to escape persecution from government authorities.  The vatican threatened to organize an Olympic boycott if military entered the church to arrest protesters (Dr. Jung's lecture).

I was highly impressed at the turnout for early mass. The congregation was composed on mainly older people and no other foreigners except for me. Despite the large number, silence filled the cathedral as most of them were absorbed in their prayer books. Some of the ladies wore the traditional Korean Hanbok and the veil used during mass as a sign of devotion and respect.  This immediately grabbed my attention. It was a perfect integration of culture and faith in modern times.   I noticed there were no kneelers, they showed their reverence by continuously bowing.  Soon after service ended, the majority of the people present remained in silence. 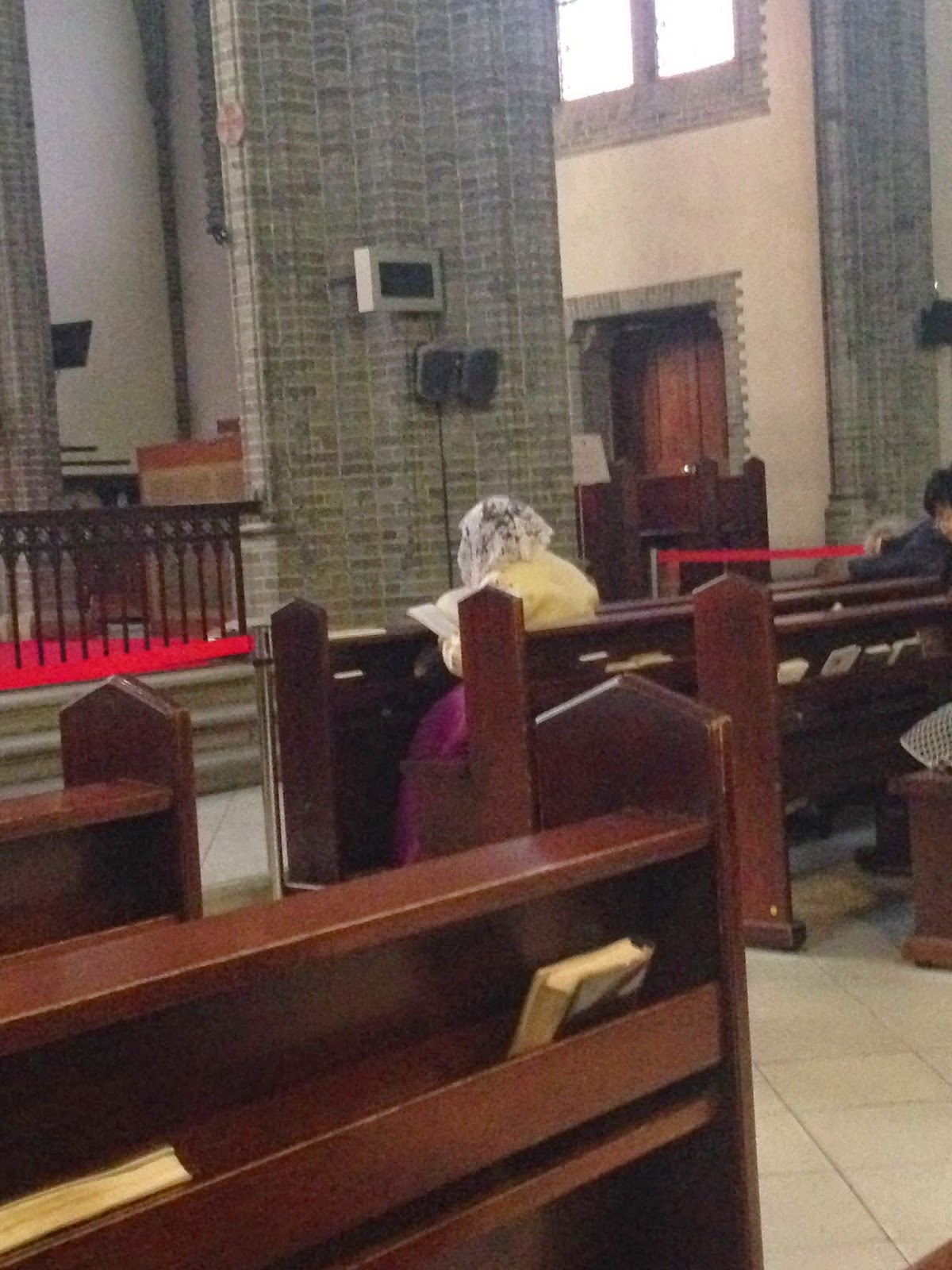 A highlight of Pope Francis' visit was to beatify (an honorable recognition in the Catholic Church) 124 Korean martyrs who suffered persecution in the 18th and 19th century during the Josean Dynasty During this time period, those who practiced other faiths beside confucianism were prone to persecution.
The main entrance doors hold a special meaning. In it we can see two important figures in early Christianism in Korea. Right below them are Catholics fleeing persecution. 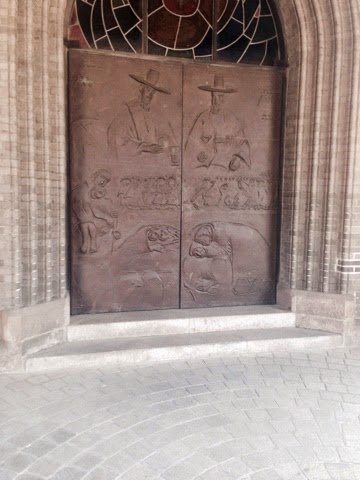 Centuries later, activist in the Democratic movement would do the same. 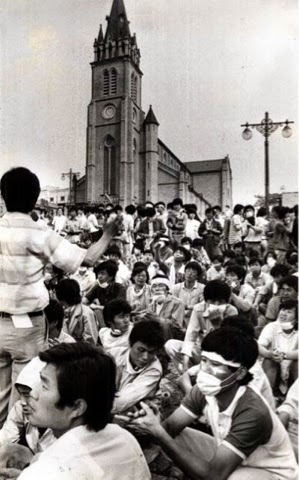